Shamanism - Religion of Magic and Miracles

J.B. NOSS in his book Man’s religions defines magic as “an endeavor through utterance of set of words, or the performance of set acts, both, to control or bend and power of the world top man’s will. It cannot be divorced from of religion “but it is discernibly present when emphasis is placed on forcing things to happen rather than asking that they do.” A recent very enlightening and inspiring feature published in the Express Tribune impels to make a reference to a write-up emanating decades ago from an English daily then in circulation whereby an eminent writer Qazi Ijaz Ahmad aptly threw light on the subject which is presented as follows for the information of the readers believing sanguinely that its read in conjunction with the recent feature would help young researchers aiming a wider study for a dissertation: “Magic, as inferred from this definition, has been an essential component of all primitive religions. 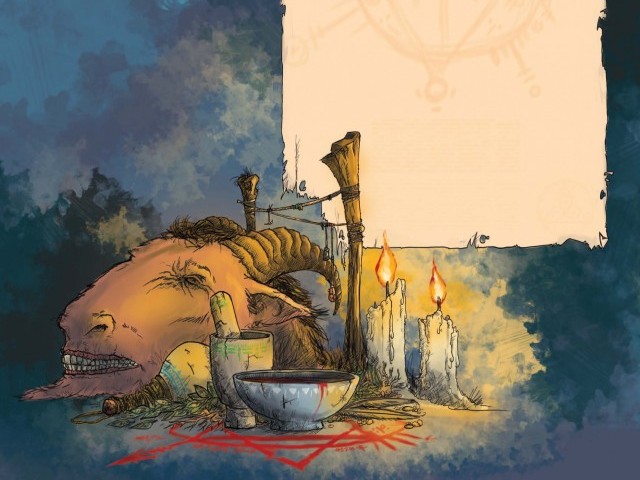 Shamanism, a religious system and phenomena centered on the Shaman having function of a priest and a magician was originated among the Tunguz tribe of eastern Siberia. It is hard to give a single definition of the shamanistic activity or describe its evolution in true historical perspective. However, it is generally agreed that shamanism evolved before the development of class society. It was practical among people living in the hunting-and-gathering stage and that it continued to exist, somewhat altered among peoples who had reached the animal-raising and horticultural stage.

According to some scholars, it originated and evolved among the more developed societies that bred cattle for production. The followers of this system believe that evil spirits have influence on man’s fate. These can harm or benefit man and their priests (Shaman) have the authority to neutralize that effect. Shaman is literary term which means “he who knows”. The Oxford dictionary defines it “priest or witch doctor of class claiming to have sole contact with gods.” Sir Herber Risley in his book “The People of India” informs us that the word Shaman is supposed to be varied of the Sanskrit Sarmana and Pali Samana appears in Chinese Sha-man or Shiman in the original sense of a Bhuddist ascetic and passes into the Tunguz as Shaman.

The Shaman usually enjoys great powers and prestige in the community and is often a person of superior intellect and ability. He as a priest, medicine-man, wizard or magician, acts to cure diseases, to reveal the future, to influence the weather, to decide cases and to take revenge from the enemy. Although most Shamans are men, the male Shaman frequently denies his sexual identity by assuming the dress and attributes of a woman. The Shaman leads a secluded life, practices various austerities, wears mysterious and symbolic garments and performs noisy incantations in which a sacred drum or enchanted rattle takes a leading part. On occasion, he should be able to foam at the mouth and enter into auto-hypnotic trance or fit, during which his soul is supposed to quit his body and travel to faraway places, typically over mountains, under the sea or under the earth, to contact and communicate with the mysterious spiritual world and render the destructive power of these spirits harmless. In this way, he shields the visible world (living things) from the effects of invisible forces (spirits).

Shamans may be classified in terms of quality and degree. Qualitative difference is based on the facial color of the Shaman and the kind of spirit communicating with him. “White Shaman is believed to have contact with a benevolent deity and the good spirits while “black Shaman with a wicked deity and the wicked spirits. Shamans, according to their powers, may be classified as great, intermediate and small. It is believed that the souls of the future Shamans are reared upon an immensely high tree in the upper world, in the nests at various heights. The greatest Shamans are brought up close to the top of the tree, the intermediate ones towards the middle and the smaller ones on the lower branches. The Shaman’s assistance is extremely necessary at three major events of life: birth, marriage and death. If a woman bears no child, then, according to the belief, the Shaman ascends to heaven and sends an embryo soul from the tree of embryos. After birth, the Shaman performs libations for the quick and healthy growth of the infant. When a death occurs, the Shaman catches the departed soul floating in the space and escorts it to safely reach the other world.


The Shaman, by birth, has certain marks which distinguish him from other men. He may have more bones in his body, additional teeth or extra fingers. Therefore, he does not become a Shaman simply by willing it but it is the supernatural beings that choose him. They call him before his birth. After becoming a Shaman, he sleeps for many days. During this long sleep, he, according to the belief, is cut into pieces by the spirits to count his bones or see other additional signs. After this, he is introduced to the “supernatural beings” and he symbolically ascends the “tree-up-to-the-heaven”. After this test is over, he is at liberty to exercise his authority as Shaman.” The fore-going all is well a pointer to the fact that the practice of Shamanism did not remain constricted to mere Gilgit-Baltistan. Instead, it has had roots in other areas like Central Asian Republics (CARs), parts of Russia and among other people inhabiting the giant mountainous regions of the world. It would be a trailblazing effort to delve deeper into the subject matter with a holistic approach albeit with reference to that still being practised in a part of Gilgit-Baltistan.