February 21, 2021
By Syed Shamsuddin
Eulogy from veteran journalist and famed poet Wali Nagri:
محمد علی سدپارہ کے نام ۔ ۔ ۔ ۔ ۔
بلندیوں سے محبت تھی اسکی چاہت تھی
وہ چوٹیوں کا تھا گرویدہ اور ارادت تھی
پہاڑ دیکھ کے دیوانہ وار چڑھتے تھے
میں کیا بیان کروں اسکی کیا شجاعت تھی
کہا تھا برف میں اپنا گھر بنانا ہے
تو گھر بنا لیا سدپارہ تیری ہمت تھی
تو مسکرا کے چلا اور رلا دیا سب کو
تو کھو گیا کہیں کےٹو میں تیری قسمت تھی
خدا وہاں بھی بلندی تمھیں نصیب کرے
بلندیوں سے محبت تھی تیری چاہت تھی
A fitting eulogy so aptly depicting and lovingly delineating Muhammad Ali Sadpara's sterling characteristics has been brought out by the poet. A torchbearer in the arena of the world of mountaineering, Ali, along with his equally courageous and illustrious co-climbers, hugged heroically the awfully majestic K2 to become its integral part to quench his abiding thirst of summiteering.
Indeed, they made a niche in history by accepting the challenge of scaling the most challenging, the loftiest and the most difficult peak (K2) in the formidable winter expedition that too sans oxygen with indomitable spirit and unconquerable will. It becomes well ascertainable that Sadpara - the legendary and a born-summiteer he was, so bravely hoisted Pakistan flag atop eight eight-thousanders while still aiming for the fourteen.
Famed poet and veteran journalist Wali Nagri, who held senior sub-editing position in his decades-long association with the widely circulated national daily 'Jang' until recently - deserves accolades for having come up with the above beautiful laudatory verses as a fitting encomium to pay glowing tributes to Ali Sadpara for the latter's unfathomable love for the mountains that eventually led him to hug them so proudly. True, Sadpara , the greatest of the time - also came to be known as the ‘snow leopard’ for his extraordinary courage and accomplishments eulogized both at home and abroad and as such he immortalized himself whilst assuming the iconic status and veritable identity of Pakistan. 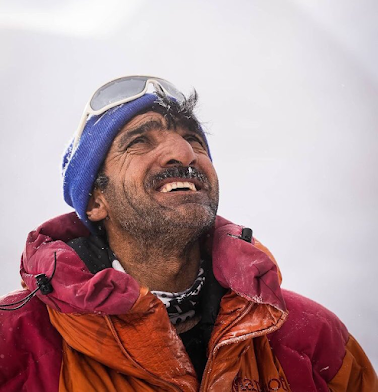 What is nonetheless, more significant in his case is in sum, that he never lost touch with the lofty and gigantic mountains with the world of mountaineering throughout his life - something exhibitive of great passion and valor that eventually drove him hug the awful icy peak of the frigid zone to get blanketed under thick ice and snow – something he dreamt of throughout his life.
To put it succinctly, he and his equally illustrious and brave co-climbers - John Snorri and Juan Pablo Mohr - all phenomenal summiteers - had such an exemplary and abiding love for the mountains that led them to embrace the awfully majestic icy peak (K2) so proudly for good to immortalize themselves in the world of mountaineering.
As regards the legend Ali Sadpara, a born mountaineer, he belonged to a family from the peripheral village of Sadpara in Baltistan whose members are markedly renowned for their being invested with an exemplary enterprising spirit and an inborn, innate yearning to summit the highest of peaks and giving a genuine boost to mountaineering in the world of adventure despite no fitting patronage on governmental level save however, that from the Armed Forces.
This is fundamentally in keeping with the fact that all our renowned climbers who earned their laurels in mountaineering were all first constrained in one way or the other, to associate themselves with foreign expeditions to make a beginning to slake their unquenching thirst for summiting they were enamored of. It, however, augurs well that Abrar Ul Haq has expressed his firm resolve to establish a Mountaineering Institute after the name of the national hero in the latter's village Sadpar which, if materialized, will be the very first of the kind not simply in G-B but in the whole of Pakistan.
Abrarul Haq said that much spade has been done in this context including contacts with mountaineering experts to seek their input in this regard while simultaneously taking up the matter with the chief minister G-B for allocating land for making this objective achievable. Abrarul Haq said that he will be visiting Skardu next month for taking stock of preliminary arrangements. Let it be hoped that this grand scheme well attuned to the wishes of Ali Sadpara, soon sees the light of the day.
There remains afloat on social media, another valid proposal from some, that alongside the above, a project of establishing 'Ali Sadpara Medical College' in Baltistan be equally considered. This is in addition to conferment of the award of Nishan-e-Pakistan on him. Who can deny the merits of such a proposal in seeing that G-B couldn't have such a single facility of the sort during long seven decades at a stretch regardless of the fact that this backward, peripheral region deserved the setting up of at least two such colleges with one in Baltistan - as the latter is well-deservedly renowned for its being the veritable hub in the world of mountaineering for its being home to innumerable lofty peaks including K2.
These stupendous/superlative characteristics associated with the region necessitate putting in place state-of-the-art facilities inclusive of medical/educational here as well for giving a genuine boost to mountaineering alongside addressing the economic/educational backwardness facing the region. May God Almighty grant fortitude to the respective bereaved families to overcome the tremendous grief and trauma. Amen!
It is pertinent to add here in the end that Gilgit-Baltistan region is a repository for five of the world's 13 highest mountains embellishing Pakistan. No other country could boast of a setting where four great mountains ranges - the Karakoram - the Himalaya, Pamir and the Hindukush which serge merge and converge to form a conglomeration of amazing altitudes. These mountains have all along history, served as veritable storehouses of valuable resources such as water, energy and flora and fauna in addition to being key centres of culture and tourism. But nevertheless, a correct appreciation and genuine understanding of this unique treasure is still sadly awaited to make the goals of sustainable, eco-friendly/adventure tourism achievable and above all, in terms of measures direly needed to harness the region's gigantic human resource.
In conclusion, it is pertinent to quote what Ali Sadpara is referred to have said: ' 'In climbing, there are two outcomes—life or death—and you must find the courage to accept either possibility.' - Ali Sadpara
Location: Gilgit