By Syed Shamsuddin
Dildar Ali Qamar’s FB post on Jani the other day impelled this scribe to have a precise look at the latter’s life sketch and come up with instant outline. Jani whose  name is Yaqoob, has a well discernible style of his own - 'walk and talk' and what in French is called joie de vivre -  always shunning any nettlesome conversation or gibble-gabble. When cracking a joke which is his wont, he can often be seen doing it rather stammeringly when in full excitement and tempo. He is widely known and has a ubiquitous presence in Gilgit city and the nearby Danyore. An acclaimed humorist and comedian, his sole aim is to diffuse happiness and spread joy among all those who come across him in society regardless of caste, color or religion, sect whatsoever. Admittedly, such sentiments are rarely found with a very few in society endowed with a keen and powerful desire to keep striving so selflessly, for the societal harmony, cultivating happiness and peace. Born at village Jalalabad where his father settled about a century back on by shifting from the ancestral village Jagote in Sai, Jani, he is a great entertainer loved by all segments of society alike, with the life-long aim and ambition being to entertain people with delightfully-worded phraseology his own coining and as such is accustomed to not simply to talk in the vernacular but sometime he is driven abruptly to use his choicest Punjabi select words as the occasion may call for. 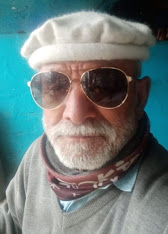 He is currently settled at Muhammadabad in the nearby Danyore township. Down the memory lane, I recall how I first met him serving as a ‘waiter or table-boy’ at the hotel of late Haji Aman Ali of Mohellah Dakpura,Gilgit, at D.A.V College Roard Rawalpindi in 1975. Jani was in his ebullient youth then and had just returned from Lahore after spending sometime there and virtually imbibing a few select Punjabi words - right or wrong. And he took pride in this ability to such an extent and degree that whenever it came to serve a table, he would prefer to talk to the guest concerned in his very unique way of aping in Punjabi accent to seek an ‘order’ often in a jocular way. But his service as waiter made it more a joke ofte-evoking roaring laughter and as such didn't last long for its having been ridiculed and pooh-poohed! Be it as it may, he in his leisure hours, routinely starts all the way from his doorstep at Muhammadabad to Danyore Chowk, freely mingling and interacting with and cracking a joke at the passersby during the course until he reaches Danyore Chowk. After spending sometime there, the second phase commences and he catches Gilgit-bound Suzuki and reaches Ghari bazaar where he is well received and so the real daylong-business starts here – jolly a jovial host a jovial welcome spent a jovial time together. In fact, a frisson of excitement runs through the crowded bazaar on his appearance, with all those who come across him on his way there trading jokes and funny remarks with him and being invariably responded to – something that keeps gathering momentum with the ticking of time in the course of his daylong rambling turning literally into an odyssey there.
All the way exchange of funny remarks and jokes take place until his landing at Gilgit bazaar where multitudes so eagerly await his arrival. He attracts a large number of fans to surround and hedge him on all sides yearning for a prolonged chat and exchange of jocular words. In the present day world where materialism has rampantly made inroads into society with every one remaining perennially engrossed in material pursuits to make both ends meet. This is all the more so in the case of the traders/merchants in the whole of Gilgit bazaar where they seemingly can’t take time off for leisure in the face of a hectic life and as such find their mind and instincts blunted by monotony of the sort. An encounter with Jani for chat then is always deemed very much soothing, nay, a treat to help assuage the situation and to feel recharged with the rendezvous with him quite unexaggeratedly proving an elixir in the face of the being encountered. In such a scenario, Jani gets singled out as the one to devote some of his time to meet people of all hues in Gilgit bazaar and the adjoining mohellahs of the city as well, where his arrival is equally avidly awaited by all and sundry for a brief interaction to derive happiness. It is said that once he went to Nagaral Mohellah during winter and coincidentally, some dogs barked at him. He wanted to silence them and in his endeavor to size up to the situation, looked for stones but found none to throw at the barking dogs because the entire soil had turned into a frigid zone. Unable to find one, he said: 'Stones here are tied by the dwellers of the Mohellah instead of chaining their dogs'. He is referred to having wistfully yet jokingly said.
There can be no denying the fact that a cheery person is much more likely to make a success of life than a man who is always gloomy and despondent. As the old verse says:- "A merry heart goes all the way, Your sad tires in a mile, O.” Going by this, it may be said that a cheery person always rises above trouble like a cork does while the despondent one sinks to the bottom like a stone. Happy-go-lucky type, he is used to stoically facing difficulties bravely, and resiliently makes light of obstacles that may come in his way; as opposed to this, a gloomy person makes mountains out of molehills, and cries, “There is a lion in the way!” And even when cheerfulness does not bring success, it brings happiness; for the mirthful person gets happiness out of all sorts of little things which go unnoticed by the sad eyes of the gloomy. Thus the imperative of cultivating cheerfulness for our own sake cannot be overemphasized. It is still more necessary to cultivate cheerfulness for the sake of our friends and companions. They have their own cares and worries; and as such we are supposed not to do acts to further compound their living in such situations more difficult with our sighs and frowns and gloomy faces. It cannot be gainsaid that a gloomy and sad person is bound to depress everyone whom he meets, and becomes an unwelcome companion; whereas a cheery friend makes life brighter for all. We must learn to hide our own troubles, “consume our own smoke”, and, even when we are feeling downcast, keep a smiling face and a cheery word for others. 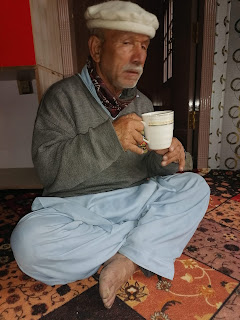 As the song says:- “Pack up your troubles in the old kit-bag, And smile, smile, smile!” In society, there can be found persons who are endowed with a cheerful outlook on life and hence remain busy in creating a blissful atmosphere around them regardless of what the times and climes may be. It is they who habitually look on the bright side of life but we are not all so. Many are by nature inclined to despondency. They see only the dark side of life, and are easily discouraged and depressed. Such should resolutely set themselves to cultivate a cheerful spirit. It is as easy to smile as to frown, to laugh as to cry; and it is ever so much better for oneself as well as for others. Jani is one such person who enlivens his circle wherever he may be.
One would readily concur with Dildar Ali Qamar that characters of Jani’s ilk are few and far between nowadays while there is abundance of prophets of doom and gloom. In such a scenario, those devoted to and becoming instrumental in happiness or delightfulness to give vent to the perennially pent up feelings, everyone coming across a person like Jani is but bound to take it a god-sent opportunity to help alleviate the gloom, be aglow with momentary joy and happiness, if not banish it altogether. This is especially true of the traders in the bazaar who have to remain engaged in business sedentarily, from dawn to dusk with the result that their nerves literally begin to fray and nothing seems to go right. It is then that catching sight of person like Jani for a friendly chat right at their venue may truly become a heaven-sent opportunity under the circumstances for a brief chat or trading words in a jovial mood. Having said that meeting with Jani is deemed a fabulous opportunity to get renewed, to escape from the crushing pressures of the daylong work they are immersed in, a break from the strain and mundane and get renewed, the grind of the long, routine life and monotonous regimen slowly wearing them out and effacing their qualities.
To psych up, they need a chat so direly, with Jani. Even while having a chat with him in the delightful way, they can go headlong into work with a cheerful mood. To them, it is a process to unwind and relax as it is proves to be something that is soothing their tired nerves. In short, Jani is viewed by his fans as the one who infuses them with new energy and vitality to prep them up. As alluded to before, begging is an anathema to him and as such prefers toiling to beggary. He spent his entire life working so hard as the bread-winner of his family. However, the injured elbow has now rendered him unable and incapacitated to carry out heavy work that is what prompted him to abandon work as a labourer at SRDP couple of years back. The writer once saw him at Sost, Gojal in upper Hunza, toiling vigorously and so zestfully at SRDP Sost as a labourer but had to abandon the same later obviously  because of the above serious impairment to his working capacity sapping his energy.