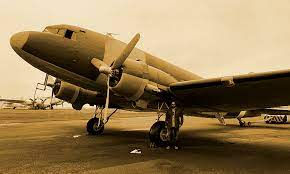 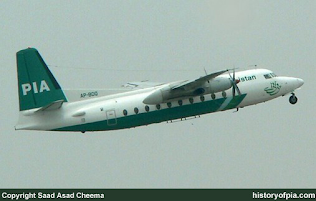 A news remaining in circulation on social media the other day referred to a significant meeting in Islamabad insofar as its getting down to brass tacks concerning upgradation of the existing Skardu and Gilgit aerodrome to that of international standards to pave the way for international air-traffic is concerned. It has to be born in mind that Gilgit-Baltistan has a very precise yet chequered aviation history with its firstly having been started with small Dakota aircraft which was then followed by operation of Fokker until its replacement by the present ATR. This air route gets reckoned with as one of the most arduous one, with all the planes operated invariably bound to skim the Babusar Pass abutting on the formidable Nanga Parbat if at all the weather there be clear and calm and cloud-free across the Pass.
Only in conducive climatic conditions, the plane has to slip down into the valley towards Chilas and negotiating turn to the right to get to the Indus Valley due north, heading provided that the valley is ahead is cloud free. About ten minutes or so, it is has to turn in the westerly direction to arrive Gilgit. 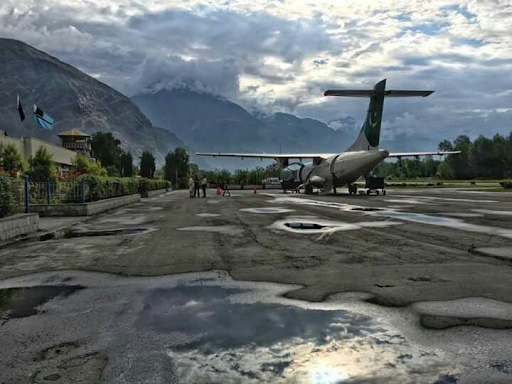 But notwithstanding the snags caused by onerous geography, the pilots have all the time made commendable striving with their proven expertise of being navigators below the peaks. While air-born here, one can have the bird's aye view on either side to feel the impacts of the quaternary era, following the retreat of glaciers; a labyrinth of folds, indentations, channels, washouts, a landscape of ramparts and deep V-shaped gulleys. And at some places, the fields, hemmed in on all sides, clinging to the steep slopes, are constantly subject to land slips or flooding; the mountains, it seems, have  not fulfilled their role of guardians of the fields! Offer advantages for defence, but at the same time make it difficult for man to conquer such an environment and make it his home. During the ongoing aviation process, the microcosm of the aircraft with maximal seating capacity put around 49, are filled by heterogenous group which reflects the ethnic mosaic of the contemporary Gilgit-Baltistan remains underway albeit subject to the weather conditions.
Only the traditional woolen cap usually adopted by each new arrival gives a semblance of unity to the regional population.
In the event of an international airport, the bigger passenger aircrafts will be operated to fly, at considerable height over the jagged mountains and the loftiest of peaks to get to  the destination quite trammeled it does currently does in the case of Boeing operations to Skardu Skardu airport for which only the approach valley has to remain visible for landings and takeoffs. Unlike this, the ATR flight operations to Gilgit are oft-bedevilled by the ‘subject to weather’ phenomenon and hence remain mostly suspended because of vagaries of wind and weather obtaining across Babusar Pass.
Better late than never, the meeting chaired by the Prime Minister so propitiously mulled extensively, the plan of aerodrome upgradation over which if implemented will become greatly instrumental in ensuring air traffic domestically but internationally as well to provide greater access to Gilgit-Baltistan. This landmark meeting was reportedly participated by the Secretary Aviation Division and the Director General Aviation Division to brief on salient features of both the multi-faceted projects at Skardu and Gilgit.  Who can deny it that giving a genuine boost to aviation facilities in keeping with and attuned to the present and future needs of the times likely is to go a long way in enhancing accessibility this immensely strategic region so direly needed. Given this, both these projects attaching multi-pronged significance implementation of which would be highly facilitative in addressing the public grievances generally while being instrumental in mitigating the accessibility issues facing the domestic as well as the world tourist visiting Gilgit-Baltistan at large. 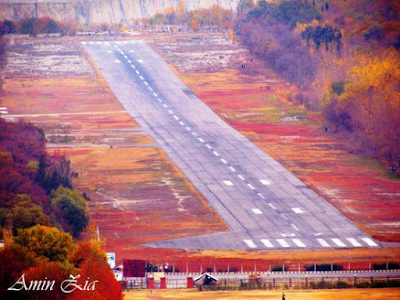 In the course of their briefing, the federal aviation secretary and the Director General Aviation are referred to having thrown light on the significance of the proposed expansion of the Gilgit airport whilst bringing it to the fore that the services of consultants were already sought for the purpose of technical study associated with determination of the locus suitability and feasibility of a site to be sifted out in the very first instance, for the construction of the prospective airport in Gilgit. It was related to them to have divulged that five firms of world repute have so far offered their consultancy services in connection with the building of the prospective airport. This process, they say, is to be completed by October 30, 2021 and the respective consultants would formulate their recommendations to submit them to the government by April 2022.
In the case of the plan of internationalizing the Skardu airport, its present runway is reportedly to be further extended in conformity with the international standards for, necessary acquisition of land will be made. Hailing the proposals, the Chief Minister Gilgit-Baltistan reportedly laid emphasis on the implementation of both the plans. Regarding Gilgit airport, he said construction of an int’l airport in the sub-region too, attached great significance in seeing that Gilgit-Baltistan is the gateway to CPEC and work on mega projects like Diamir Basha Dam, Bunji Dam is in progress and hence the construction of an int’l airport at Gilgit was the need of the hour. On the other hand Baltistan region attaches great significance for its remaining the hub of tourism especially adventure tourism. It is a surprising land where lay clustered the world’s highest mountains topped by the world’s second highest majestic K2 - the cynosure, tantalizing and beckoning the world’s adventurers/summiteers. Precisely, the immensity of these amazing phenomena associated with Baltistan – the land of peace and tranquility – necessitate putting in place world class aviation facilities to provide unhindered accessibility to all foreign tourists to this unique land. Be it as it may, the topography of Baltistan is somewhat different from Gilgit while in terms of it geological setting, Skardu is known for its expansiveness and extensiveness offering the prospects of provision of the aviation facilities quite untrammeled. The case of Gilgit is glaringly different from the latter in the matter of geological setting which indeed calls for a minute evaluation any feasibility/technical study of finding the locus for the proposed airport. It is worth mentioning that the very first landing of airplane (Dakota) in 1947 took place where the Karakorm International University (KIU) main campus stands now. This was then followed by construction of the present Gilgit aerodrome om the heart of the city.
Getting down to brass tacks, one could see with the benefit of hindsight aerially, that while crossing the Nanga Parbat and taking a steady turn above Bunjis and Sai nullah, is reached Parri Bangla then flying first, over Chamogarh-Jalalabad-Oshikhandas air stretch. To the left, Minawar-Sakwar-Jutial belt stretches. The first encounter is with the stretch of land from Chamogarh-Jalalabad-Oshikhandas with the latter two centrally pierced and halved by the Bagrote nullah. The attention can firstly be devoted to appreciating this land in the context of feasibility or otherwise from technical/aviation point of view for offering an international airport facility. Then comes the land stretching from Torrokee abutting Oshikhandas towards Muhammadabad and Danyor in the range. On the other side of the river fall Minawar-Sakrwar intervened by the G-B Scouts chief garrison with Sakwar to the west. There can also be the option of carving out the land for the proposed international facility extending from the Police Training College (PTC)toward Jutial past Frontier Constabulary Headquarters. Yet another option could be to consider the stretch of land from what is called Syedabad (Didingdas) Danyore towards Sultanabad (former Gujjardas) which is ostensibly hampered by Danyore nullah.
Last but not least is the final the final option open to consider the site stretching from 'The Agha Khan Health Center' Shilmishdas and extending towards the Shilmish (Nomal) to the north along Hunza River. Feasibility study of yet another site at the nearby Jutal village lying between Al Asr Colony to old Jutal village' too could be taken into consideration.  These are, in sum, the available options to be evaluated technically and aviationally, by the consultants assigned the task, to arrive at the most feasible and viable solution to help construct the prospective int’l airport. Let it be seen how they proceed!